NFTs In A Nutshell: A Weekly Review The NFT market continues it’s wacky ride of high highs and low lows each week. We’re still seeing goblins dominate the conversation, the often criticized Solana downtime has struck again, easing the pace of ‘Solana Summer,’ and a once highly-respected OpenSea executive is the first to face federal charges over insider trading.

Each weekend we supply the weekly report for everything you missed from Monday through Friday. Let’s review all of the biggest stories from the past week.

Social media channels are proving to be a pain point for some of the biggest NFT projects out there, and Discord is proving to be a focal point for attackers. This week, a Bored Ape Yacht Club Discord admin and community manager had their account taken over and a phishing post was spread throughout the BAYC and Otherside Discords. The dust settled with roughly 200 ETH worth of NFTs stolen.

What’s the shelf life of a goblin? We’re going to find out first-hand, apparently. Less than 30 days following mint, goblintownwtf NFTs are still a hot topic throughout the community, and at time of publishing, still a dominant volume leader too (leading all volume over the past 24 hrs with over 3,250 ETH worth of activity, according to Nansen data).

Zora is launching a powerful new API that is expected to have detailed data covering north of 40M NFTs, according to a new announcement from the NFT marketplace. Data will include “minting information, historical data, every sale made, current market value, metadata, and optimized NFT media,” according to reports. Zora has provided a sleek, clean UI and extremely user-friendly experience that has made it a strong force in the competitive marketplace battlegrounds. Expansion of API tools will likely bolster it’s positioning. 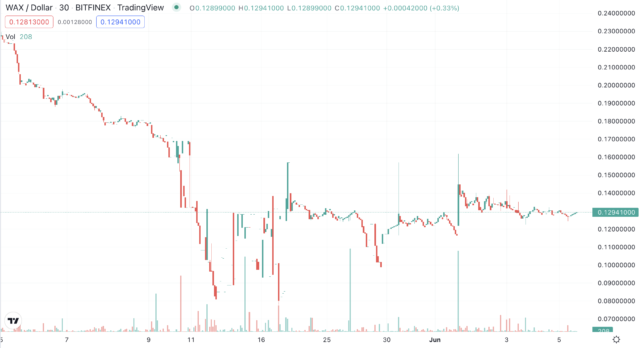 Ex-OpenSea Head of Product Nate Chastain was once highly respected in the NFT community, and his departure from the platform following insider trading allegations was a hot topic at the time.

Chastain is now in the sights of the Department of Justice, as he was detained in New York City this week and will face charges of wire fraud and money laundering. Chastain has been accused of buying NFTs with various wallets based on insider information around the collections anticipated listing on the OpenSea home page.

The discussion that has followed has many asking if these charges against Chastain will be the first step in considering non-fungible tokens as securities.

WAX is a blockchain geared for NFTs, but it’s been fairly quiet in recent months when it comes to major moving activity. No need to mistake quiet moves for a lack thereof, however, as the WAX blockchain raised $10M this week in a fundraising round led by OKX Blockdream Ventures that will go towards WAX Studios, a subdivision focused on P2E and GameFi development, as well as a gaming token exchange.

WAX has been a force in this landscape despite having quiet stretches, and has established top tier partnerships with the likes of NASCAR, Sony, Hasbro and more.

Need an example of how fast things can change in crypto? In early February, our team here at Bitcoinist covered Kanye West’s vocal perspective on dismissing NFTs and focusing on “building real products.” Fast forward five months, and this week Ye has filed 17 metaverse and non-fungible token related trademark applications. Oh how the times change.